Sandler Trade LLC and the Alliance of GSP Countries continue to fight for quick renewal of GSP. The program remains lapsed despite bicameral and bi-partisan support. Please see below a press release issued by the Alliance. 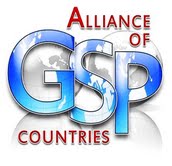 The 22-member Alliance of GSP Countries has renewed its efforts to urge Members of Congress to reauthorize GSP as soon as possible.  The Alliance greatly appreciates the bicameral, bipartisan effort put forward by House and Senate trade leadership to renew GSP prior to its expiration on July 31, 2013. Though unsuccessful, the efforts of the trade leadership point to GSP’s overwhelming popularity among Congress, U.S. businesses, and consumers.

Time is of the essence; U.S. companies have paid $175 million in unanticipated duties just in the last three months. Suppliers are impacted, too. Of the 22 Alliance members, more than half have experienced significant decreases in U.S. imports under GSP. The smallest or most remote countries that have experienced the largest declines, including Mongolia (97.3%), Macedonia (56.7%), Fiji (23.1%), and Nepal (9.1%).

The Alliance strongly urges Congress to double its efforts to renew the program as quickly as possible. It is time to reinstate duty-treatment of GSP-eligible products coming from developing countries – 70% of which are used as inputs for further manufacturing by U.S. companies.

During the three months that GSP has not been in effect, imports from developing countries have dropped overall by 5.4%. Alliance countries’ small and medium-sized businesses are losing hard-won U.S. market niches to non-GSP low-cost producers. Prior periods of GSP expirations have shown that, even after retroactive renewal, U.S. import levels do not recover so many of these businesses do not survive. Examples of products that are facing high tariffs include telescopic sights from the Philippines (14.9%); fashion jewelry from Sri Lanka (11%), plywood from Indonesia (8%); building stone from Brazil (6.5%); pesticides from India (6.5%); and prepared foods from Thailand (6.4%).

The geographically and economically diverse group of Alliance countries strongly urges the Senate to pass S.1331 and the House to pass HR 2709 to renew GSP as soon as possible. As of today, no clear path for renewal has been outlined by both parties. Businesses in the United States and abroad will continue to pay the price for that delay.

Information on the Alliance and GSP is at www.allianceforgsp.org Media Contacts: Yasmine Rouaï, Sandler Trade LLC, at 301.648.0218 (yrouai@sandlertrade.com); and Marideth Sandler (sandler@sandlertrade.com) at 202.492.7473.

This entry was posted in International Trade. Bookmark the permalink.